Astrophysics as a profession 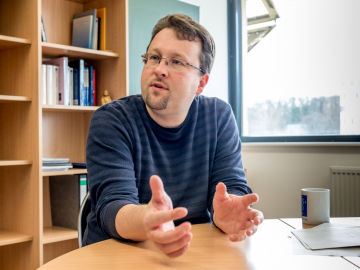 Prof. Dr. Stephan Geier is an astrophysicist and historian. Since 2018 he has been researching and teaching at the University of Potsdam at the Institute for Physics and Astronomy. His areas of research are the final stages of star development, such as supernova precursors and narrow binary star systems, and the interaction between stars and substellar objects such as brown dwarfs and planets.

In this interview, he talks about his career and current professional challenges.

Today we want to talk about astrophysics as a profession. When did you realize that you wanted to become an astrophysicist?

Actually this took some time. I studied physics at the University of Erlangen-Nuremberg and history at the same time. During my studies, I really enjoyed researching and working in astrophysics, and when I was doing my doctorate, that really got me. From 2004 to 2012 I worked at Dr. Karl Remeis observatory in Bamberg, starting as a graduate and doctoral student. It was a great time: for science and also thanks to the very friendly and familiar working atmosphere there.

After the doctorate, was it easy to find a job in science?

No, rather not. I had to take care of further funding, first as a postdoc with a position funded by the German Research Foundation (DFG), then through a scholarship to the European Southern Observatory ESO in Garching near Munich, before I went to the University of as a Marie Curie fellow Warwick in the UK. I actually assumed that I would stay in England, because there were very good prospects of a permanent job there at the time.

Was that the way to a professorship?

No, not at all. I think the path to a professorship is almost never mapped out. There are many excellent colleagues who absolutely have the qualifications for a professorship and unfortunately never obtain a permanent position or professorship in astrophysics. Often, this is not decided by talent or expertise, but also related to many other factors, such as timing, current vacancies - and some luck. Many of these factors worked out for me.

So how did you end up becoming a professor?

That was a rather curious story. Shortly after I left Garching, when I was in Warwick for just a month, I got an offer for a permanent position as an academic adviser in Tübingen. Of course, I couldn't refuse it, because such an offer is very rare. So after only five months in England I moved to the University of Tübingen in April 2016. A short time later there was the next chance: a professorship in Potsdam. That was my first application for a professorship and it was all the more astonishing that it worked right away. I have been a professor of stellar astrophysics at the University of Potsdam since April 2018.

What has changed with the professorship?

What is new for me is that I now of course take on more teaching tasks and administration has also taken up a larger part of my working time. But what surprised me the most is that leading a larger research group and doing research together is so much fun. In my previous career, I was more used to being a lone warrior. I always had to design my own job, my own project, apply for it and then carry it out myself. That changed very quickly at the University of Potsdam. In the first year my working group grew very quickly. First there were four postdocs, two of them with their own funding, such as a Humboldt scholarship and an Open Topic scholarship from the University of Potsdam, and then a few master's and doctoral students. As a group leader you have a lot of responsibility and you have to take care of the big picture - financially and organizationally, but of course also as a supervisor. The best thing is to see how quickly the young scientists develop and get together as a team.

What is your everyday life like as a researcher today?

I have less time for research and I don't observe as often as before anymore. However, even in the past, it didn't happen as often as you might imagine. Most of the time I have been traveling for observing campaigns once or twice a year. Of course, these are always particularly exciting, sometimes even adventurous due to the remote locations - and sometimes also meditative. You have a lot of time to think. We try to offer such observation opportunities also to our master students. For example, we have a joint project with the Ondrejov observatory in the Czech Republic. This project also prepares the students a bit for the international astronomy community. Our community usually meets annually or every two years for a large conference. In more specialized fields you know each other very well, it is very familiar, even if we are spread all over the world. I find it very fascinating that everyone shares the same passion for astrophysics - no matter where he or she comes from. This common spirit is very helpful for large projects, for which you have to form international consortia. These efforts are connected with a lot of organization, precise project management and need to be broken down into work packages. When working through these packages and work steps, you almost feel like in industry. In the end, however, the rewards are such great successes as the Hubble telescope.

The international master’s course in Astrophysics at the University of Potsdam started a few years ago. What is your experience so far?

We have consistently high numbers of applicants for the master programme and our students come from all around the world. This makes our master’s degree very international. Nevertheless, astrophysics is not a mass subject. The studies are quite complex and demanding. However, the close exchange with the lecturers helps a lot. At the premises of the university, everything is close together. The seminar rooms are in the immediate vicinity of the teachers' offices. This allows for a lot of informal exchange with the students, who often work in the open workplace areas at the institute. You really get to know each other well.

What makes the course special?

The broad range of subjects in this master's programme is unique to Potsdam. With the many joint appointments with non-university research institutions and the professorships at the University of Potsdam, we actually cover the entire astrophysics: From cosmology to stellar astrophysics, exoplanet research to gravitational wave physics, everything is included. In this variety, there is probably no such other place in Germany and worldwide, a master with a major in astrophysics is also rare. At most universities, astrophysics is a rather minor subject. Here in Potsdam, however, we have a really strong location with the University, the Leibniz Institute for Astrophysics, the Max Planck Institute for Gravitational Physics, the Albert Einstein Institute and the German Electron Synchrotron DESY which has a research focus on astroparticle physics.

What special skills does the course provide students with?

Students in Potsdam are actively involved in research at an early stage. For example, they contribute to scientific publications, work on joint research projects - also with non-university research institutes - and frequently give talks during their studies. Of course, they also obtain soft skills such as teamwork, project management and intercultural communication. The conditions here in Potsdam are very good to make contacts in astrophysics and hopefully to then quickly find a job.

What professions and perspectives are there outside of astrophysics?

Astrophysics is very competitive, like many other subjects, and there are few positions in research. Therefore, you should also think about other career options. For example, we plan to further expand the “Computational Astrophysics” area which promises good job opportunities, e.g. as a  data scientist. Of course there are also career opportunities in the area of ​​education and teaching or in software development and at IT companies. Some of my former colleagues have also become patent attorneys.

You are not just an astrophysicist, but also a historian. How can you combine both?

In joint courses! Together with our colleagues from the Faculty of Human Sciences, we are planning a joint seminar on the history of science, more precisely on scientific breakthroughs, and a lecture series on observing the sky in antiquity. As a historian and astrophysicist, I am particularly pleased that interdisciplinary collaboration with other departments works so easily here.

Thank you for the interview.

Read more about Astrophysics as a profession in an interview with Professor Philipp Richter.